NFL Draft day is closing in, which is basically my Christmas!!  I get everything ready in advance, make sure all the food is in the house for the weekend and prepare to enjoy four days of nothing but football and analysis of the draft.

Along with my brother Joe, we have worked on the AFC North draft analysis for the OurLads draft magazine for a number of years now.  The cool part, which is included in the picture below, is the Steelers organization at the draft actually uses the draft magazine which is in his hands.

We have actually been correct with a number of draft choices, including Jarvis Jones and David Decastro, among others picks throughout the seven rounds.  My choice last year was Mosley but the Steelers took Shazier, which we will need time to see him play healthy before really rating him as a player.

On to this year's draft.  The Steelers have a number of needs with legends retiring and players leaving via free agency.  The main needs are Cornerback(several actually), Linebacker(preferably outside), Safety with future Hall of Famer Troy Polamalu retiring and Depth at Tight end as Heath Miller adds another year to his stellar career.

I wanted to throw some names out there as possible 1st round picks for the Steelers, who have multiple needs and filling anyone of them will help tremendously.

The Steelers could take a cornerback first, someone like Trae Waynes or Marcus Peters if one drops to them, but with a deep corner draft, they may choose to fill the linebacker or safety need in round one. The only safety worth drafting in round one is Landon Collins. He may fall, but it is a long shot. The Steelers did trade up with the Chiefs years ago to secure Polamalu in the first round and we all see how that turned out.

The Steelers could go for the outside linebacker, as they are thin at the position and James Harrison is finishing up his huge career soon. Shane Ray out of Missouri would be big, but i don't think he will fall that far.  A solid option and a good chance of being there is Bud Dupree out of Kentucky. He would add instant pressure on the quarterback, helping the Steelers secondary in the process.

Well, the countdown is running and Christmas Day is almost here for me.  I hope you all enjoy Draft time and Go Steelers!!!!
Posted by David Kuklis at 9:35 AM No comments:

I am running an E-book promotion for a limited time for my book, Escape from Netherworld, on Amazon and Barnes & Noble.  The ebook is discounted to 0.99 cents on both sites. Download a copy for yourself and gift it to family and friends while the promotion lasts.  Thanks and I hope you get in on the sale.

Here are the links to the sale on both sites: 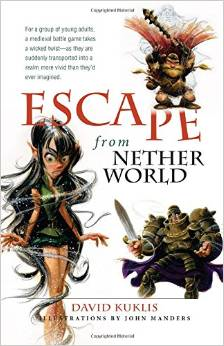 You can also go to my website, www.escapefromnetherworld.com, and the Amazon and Barnes & Noble websites are options to go to directly from there. The e-book promotion at 0.99 cents for the kindle and nook are for a limited time. Thanks,

Posted by David Kuklis at 9:47 PM No comments:

Every author is asked at some point how they deal with writer's block.  I have two different approaches I use where most of the time at least one of them work.

My first process is to go out into my garage.  I will open the door to get in the fresh air.  In my garage I have a large collection of weights with a bench.  Before I start to lift weights, I will put on a CD to listen to while I work out.  My two favorites groups to lift to are Metallica and Korn.  Korn normally worked the best. You can basically bench the bar to the rhythm of the music. 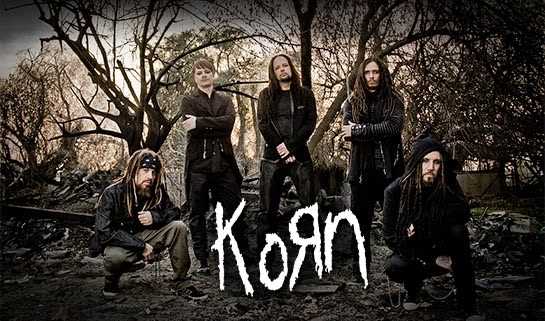 I will do as many sets of different exercises that I can to wear myself out physically, which in turn seems to help me start to concentrate mentally. Something about these two groups get my mind thinking about the next chapter or character that will be presented in the book. If this does not work, I have my favorite way of getting through the block.

As a science fiction fantasy writer, I pride myself on the details of a battle scene and try to draw the reader into the book as if they are watching the scene live in person.  I try to get the reader to fantasize that they are in an arena watching the battle as it happens.  This is where my next process comes into play to overcome writer's block.  My favorite movie to watch and the battle scene I enjoy the most is from the beginning of Gladiator.

Ridley Scott does such an amazing job with the first fight scene in this movie, it starts getting my blood flowing and my mind churning.  Usually by the time Russell Crowe comes from behind the barbarians and enters the battlefield, I have already started planning how my next battle scene in the book will play out. 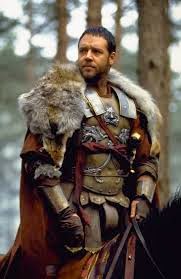 I know every author has their own method of trying to get through writer's block.  Some use quiet time, going for a walk or getting out for awhile.  For some reason, those ideas never worked for me.  I don't know if it is because I enjoy writing my fight scenes or not, but the process I go through involves other battles or heavy metal music.  This works for me almost every time I try it, besides Gladiator is a great movie and Korn is amazing music to lift to anyway.


Posted by David Kuklis at 8:38 PM No comments:

Sad times in Pittsburgh as a Steelers Fan!

As I was born and raised in Pittsburgh my whole life, the last two weeks have been tough for me as a Huge Steelers Fan.  Basically it all started earlier when Dick Lebeau, legendary hall of fame player and coach, was not returning as our defensive coordinator.  I know Keith Butler will step in and do a tremendous job, but it will just be weird not seeing Coach Lebeau on the sidelines. 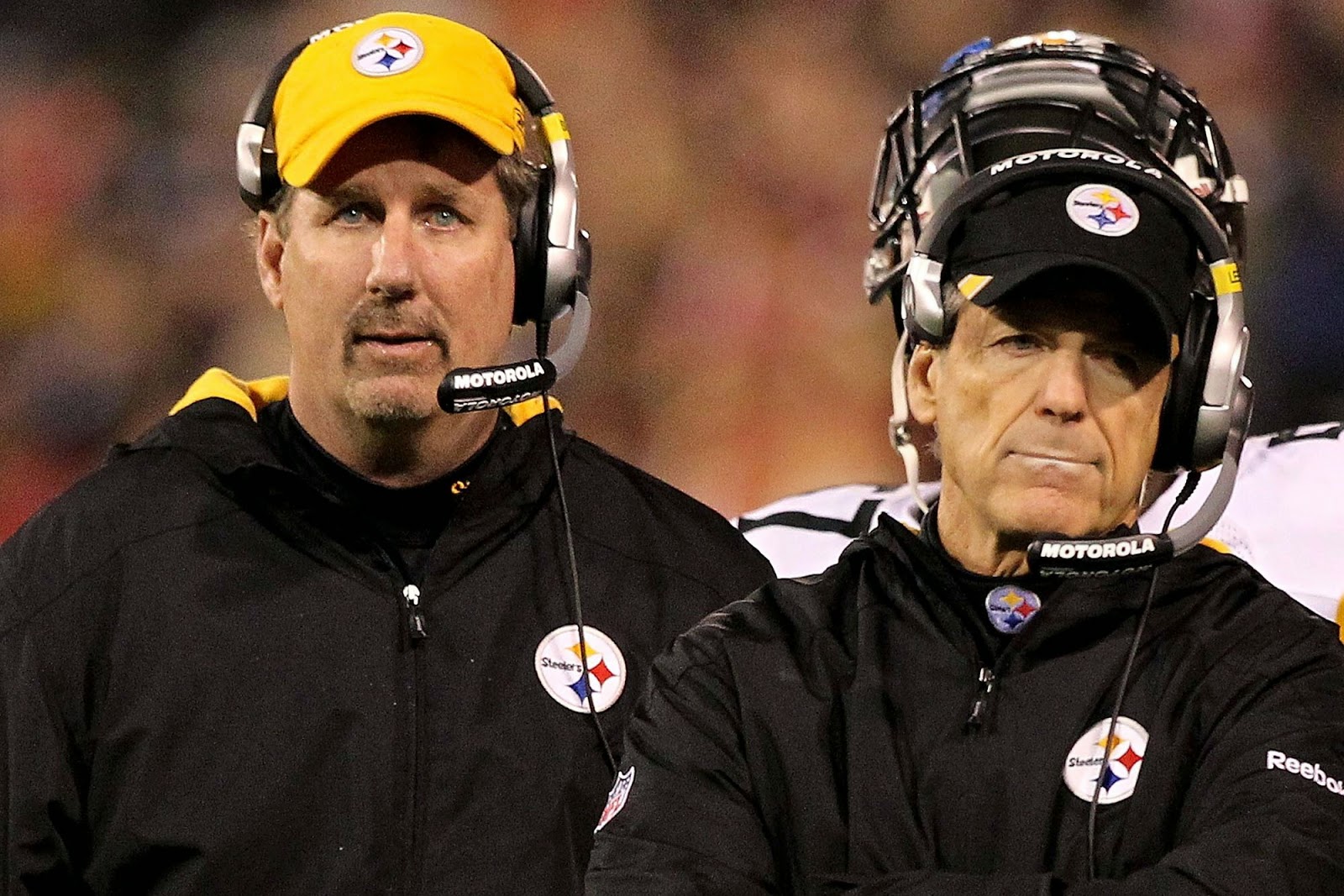 Then over the last couple of weeks, the news started pouring in about the retirement of Brett Keisel, Troy Polamalu and Ike Taylor.  These three defensive stars for the Steelers for the last 12 or more years deciding to retire is a big blow to the leadership on the defensive side of the ball.

Troy Polamalu will be in the Hall of Fame when he becomes eligible, but it will be tough not seeing his flowing locks and his unique style that changed the way safeties play in the NFL.  Every football fan knows and talks about Troy jumping over the line of scrimmage as the ball is hiked as if he knew the snap count.

Not seeing Brett Keisel and his signature beard every weekend will also be tough.  He brought leadership to the Steelers Defense and was a consummate professional on and off the field.

Ike Taylor was a solid shutdown corner in the NFL for a number of years and the Steelers loss of his experience will be a hit to their secondary. Ike always covered the top receiver on the other team, allowing the other defensive backs to enjoy more success because of that. 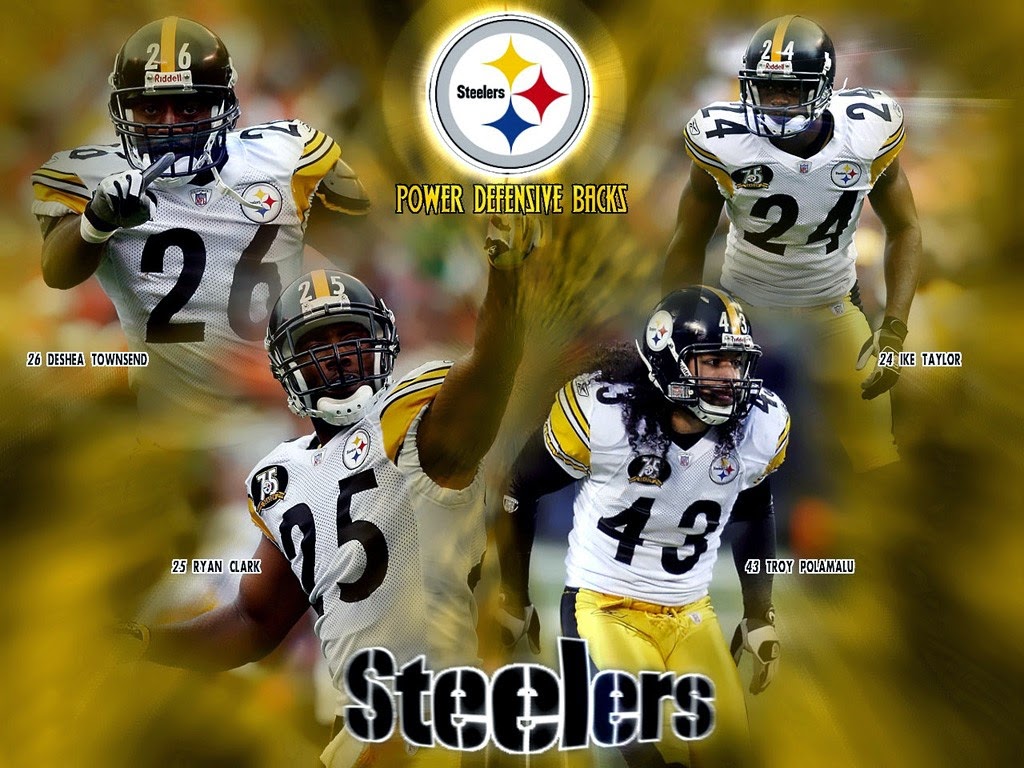 It is going to be tough to replace the combined experience of these three men and they will be sorely missed on the football field.

I grew up watching players like Jack Lambert, Jack Ham, Joe Greene, Mel Blount and many other legends. That team will never be matched in performance and intensity but the three Steelers players and the defensive coach that will not be on the field this year deserve a lot of credit as well for helping to rebuild the Steelers into SuperBowl Champions again.

These were great players on and off the field and they will be missed but never forgotten here in Pittsburgh for everything that they accomplished as Pittsburgh Steelers and what they have done for the city.

Becoming Twiggy was the Biggest change of them all.

Creating the transformation of Vince to Twiggy was the biggest undertaking for the characters that are on the cover.  I wanted to start out with how Twiggy, the dwarf fighter was going to look when the friends ended up in the alternate realm. My dad, who Vince and Twiggy are based off of, would have been so proud of how the character turned out on the cover of the book.  He passed away 11 years ago and I miss him more every day.  I just wish that he could have seen what I was able to accomplish with getting the book published. 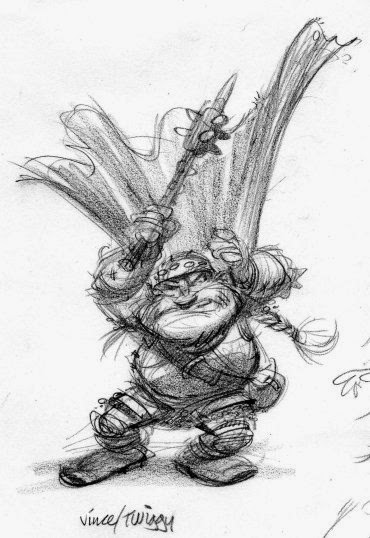 But, I also wanted to show Vince as a human transforming into the dwarf Twiggy as they enter the alternate realm as there is a huge size difference between a human male and a dwarf from medieval times. I wanted to make sure the change created a strong statement on the cover and I hope I accomplished that. 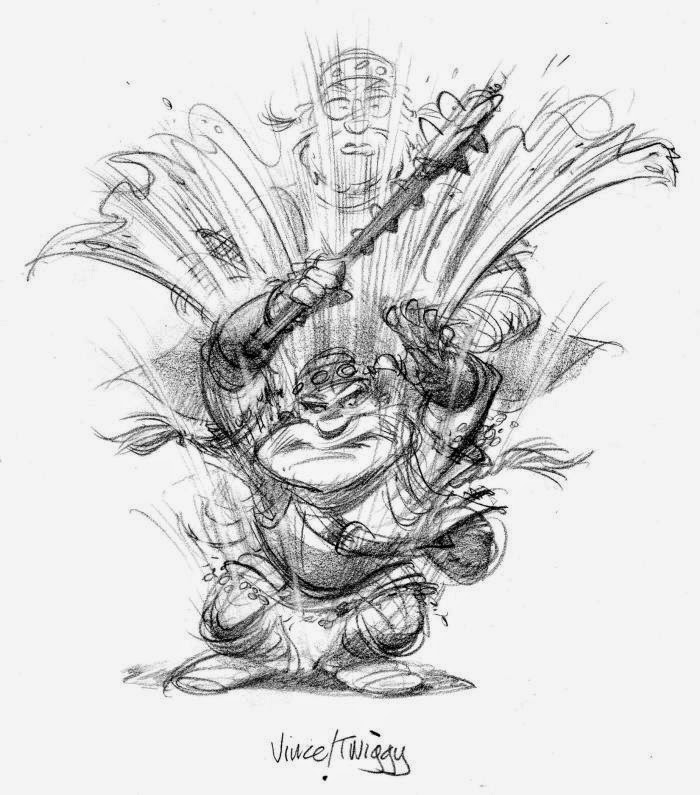 The illustrator working with water color allowed for us to work with multiple ideas, which in the end, we decided to have the human man Vince in pencil sketch form and the dwarf Twiggy in full color after the transformation. 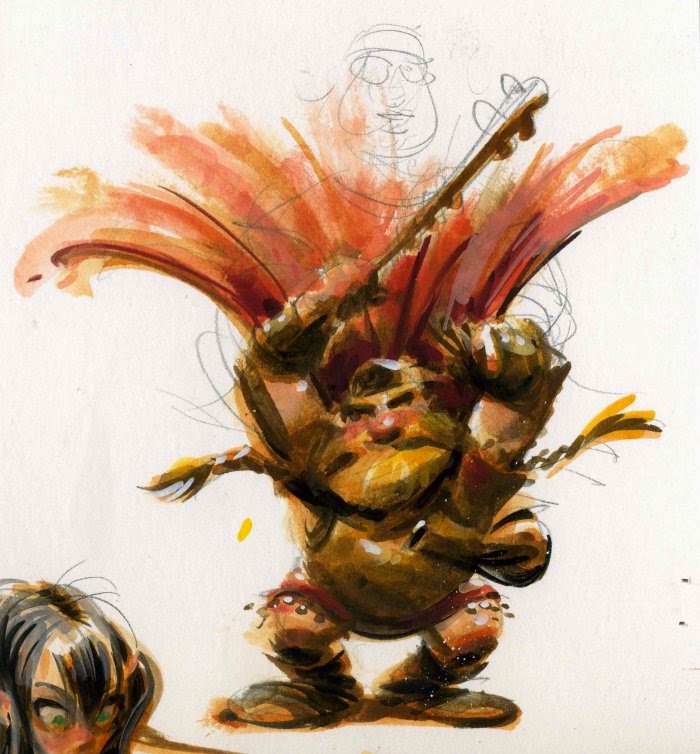 I believe the end product turned out amazing.  I could not have asked for more on how the character changes from a human man to a dwarf once they fall into the new realm.  Massive detail went into the creation of Twiggy, even in the weapon he carries as well as the beard that the dwarves are so well known for. I hope you like the transformation as much as I did. 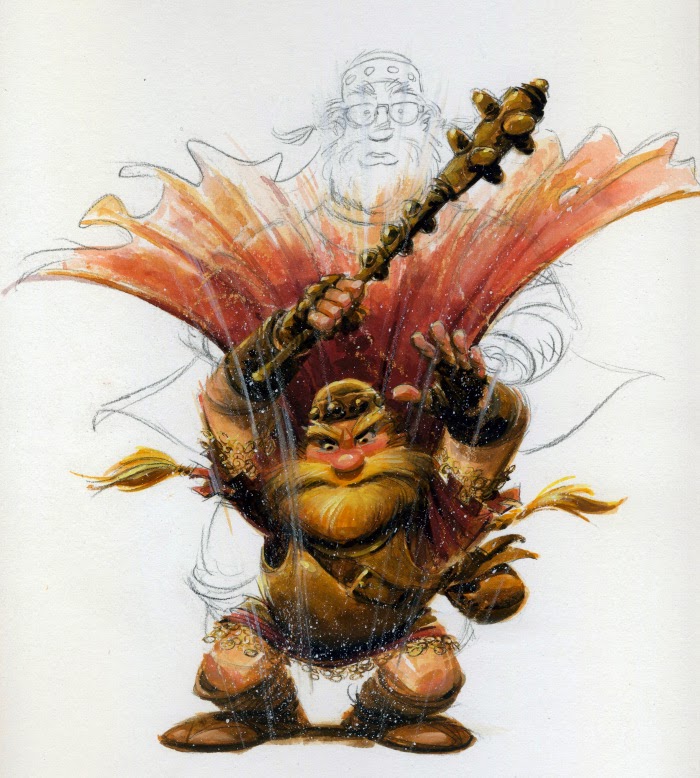 Posted by David Kuklis at 8:58 PM No comments: